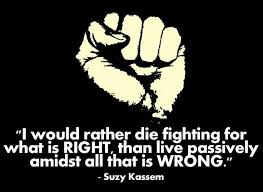 Stand!
There is a saying that says, if you don’t stand for something, then you will fall for anything.
I say, if you are not willing to live, stand, and die for the truth you know and believe is truth, then you will die for any lie!
Today I watched a documentary about the civil rights movement, and how it began.
Many people think the civil rights movement started with Martin Luther King, but it actually started with four black students from North Carolina who sat down at a Woolworth lunch counter in downtown Greensboro, North Carolina.
And as these four college students sat down at a segregated lunch counter, they were being called out their names, ridiculed, threatened, beaten, denied service, and denied their human rights.
And in the midst of all this confusion, racism, prejudice, and hate, a short older white woman came to sit by them at the counter, as she put her hand upon one of the young black man’s hand, she looked him in the eye and said to him, “I am disappointed at you, and the young man asked why, and the older white woman said, because it took you so long to STAND up for yourself!”………………hmmmm~
The young black man at the counter said those words meant so much to him, and that single moment defined his whole entire life, and nothing else could happen in his life, that could compare to the STAND he took for truth.
But if you don’t stand for truth, then you will die for any lie, and if you don’t stand up for yourself, then no one else with stand next to you or for you.
The thought of that scene with that woman made me cry, because the truth hit me hard today, as if I was there sitting at that counter myself.
(Ephesians 6:11-16) Put on the whole armour of God, that you may be able to STAND against the wiles of the devil.
For we wrestle not against flesh and blood, but against principalities, against powers, against the rulers of the darkness of this world, against spiritual wickedness in high places. Wherefore take unto you the whole armour of God, that you may be able to WITHSTAND in the evil day, and having done all, to STAND.
STAND therefore, having your loins girt about with truth, and having on the breastplate of righteousness; And your feet shod with the preparation of the gospel of peace; Above all, taking the shield of faith, wherewith you shall be able to quench all the fiery darts of the wicked.

I am an ex drug dealer, gangster disciples, whore monger, 4 time felon, I been to jail for murder, I been to the penitentiary 3 different times in my life, I am an uneducated man, I have no formal education at all, and I am a ex career criminal, but GOD HAS HEALED MY WHOLE … END_OF_DOCUMENT_TOKEN_TO_BE_REPLACED